Most of our travel adventures happened before and after the tournament in Sydney. Here we are in Cairns visiting art galleries, the Esplanade pool and walking along Grafton and Abbott.

Brentt and I only had a few days to explore Cairns and Sydney before and after the tournament. Cairns was our first stop from Guam. We stayed at the Holiday Inn (now called Double Tree) and it was in the perfect location. We could walk to the main Cairns Esplanade strip in less than five minutes and to the shopping mall in 15 minutes. The good eateries, ranging from Italian to Japanese, were scattered along Abbott and Grafton streets. Along the Esplanade, you’ll run into tourist traps and shops with crappy souvenirs – something we’re already used to in the islands, so we just kept to Abbott and Grafton, where there were more of the Cairns locals walking around. 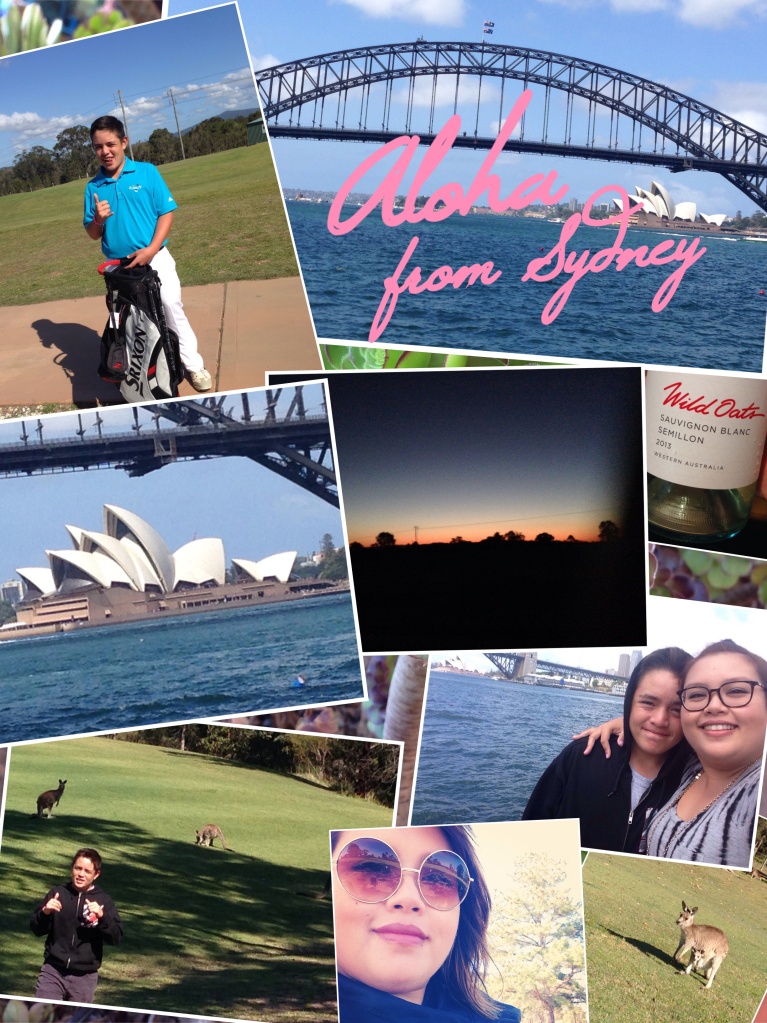 We stayed in Kurri Kurri, in the outskirts of Sydney. There were wild kangaroos right outside our rooms and witnessed beautiful sunsets. I even got to sample the local wine.

The “beach” at Cairns isn’t that great. It’s brown. You’d have to ride a boat to the Great Barrier Reef to log in some great snorkeling…or you can just settle for the public pee-pool at the Esplanade. Your best bet to get some sun (other than going to the GBR)? Spend the day at the beach down Captain Cook Highway past the airport. The beaches are still brown, but at least it’s shallow, you can walk on sandbars and bbq like the locals.

After Cairns, we headed to Sydney via Virgin Australia. Most of our time was spent on the golf course (see previous post) and the only food available was fried EVERYTHING. French fries, chicken schnitzel, fish and chips, etc. Not the most comforting way to go with two hungry island kids craving anything with some Asian spice and rice or noodles. On our last day, we had a couple hours to visit the Harbour Bridge and Opera House. Our hosts from Hawaii were irritated by the traffic and ready for their flight back to Hawaii so we didn’t have a chance to fully explore the city. But we made the most of it and took lots of photos during our last day in Sydney.

Our official last day in “Straya” was spent at Hartley’s Crocodile Farm.

We then arrived in Cairns (again), returning from Sydney, we were weary travelers, enduring a rough flight on Virgin Australia and starved after refusing yet another fried meal. After checking into Rydges Esplanade, we took a 20 minute walk to grab some dinner and stumbled upon what looked like a bar from the outside, Rattle & Hum. It happened to have the best pizza in Australia that we had access to at the time.

This is something we’ll always remember about Australia. Its wildlife, sights, kind people and wonderful weather amazed us everyday.

We also decided to visit Hartley’s Crocodile Farm, which was 45 minutes away from the hotel. We bought a package for two that included the passes to the farm and transportation to and from our hotel for $111 AUD. It was fun! We covered the entire park in about two hours and relaxed with lunch at the restaurant. It was their 80th Anniversary so they had face painting, a free photo booth and complimentary croc sausages. It was the perfect way to see everything we wanted to see in Australia: crocodiles, koalas, cassowaries, wombats, wallabies and kookaburras.

It was a great trip for Brentt and I. We’ve traveled to other places before, but this was our first brother-sister trip to another country. We enjoyed every bit of it. Oh dear Australia, it’s been unreal. It might be a couple years until we return, but until then, we’ll cherish the memories. 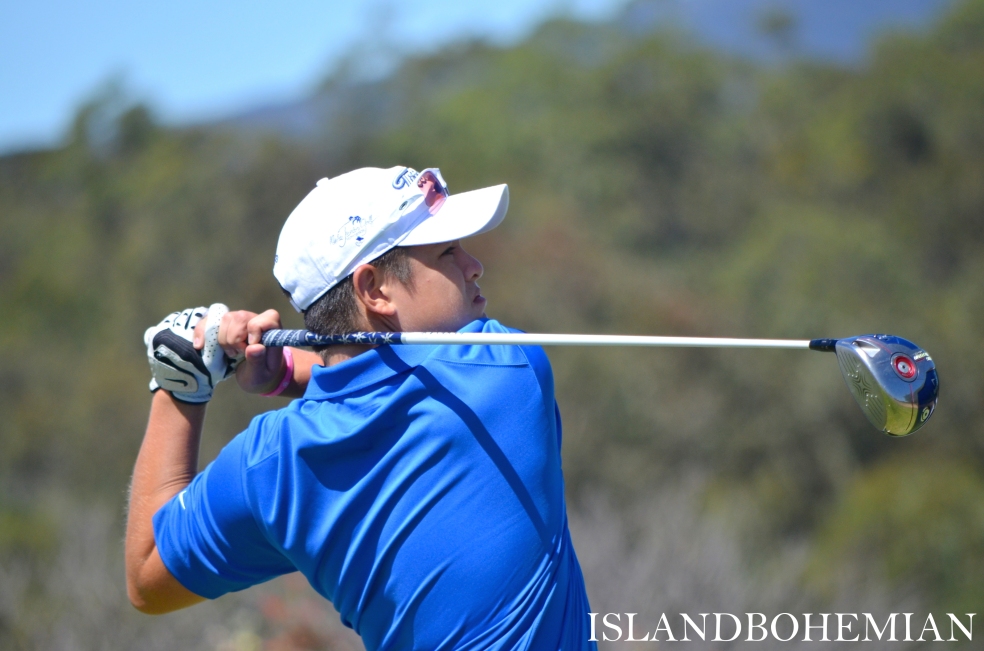 My brother represented Hawaii in the Srixon tournament in Australia last week. He won 2nd place overall in his division. I’m so proud of him!

Brentt managed to stay out of the trees on the 13th hole at Kurri Kurri Golf Club.

The Australian tournament hosted many international junior golfers from Canada, Korea, Thailand, Japan, New Zealand and the U.S. Brentt qualified through the Pearl Junior Open in Hawaii with two other golfers, Caleb Keohokapu, 17, who played in the Junior Classic division and Ray Kim, 14, who joined Brentt’s division in the Sub Classic. The three boys were amped to play this tournament because it represented another level of competition for them and also provided an opportunity to get more exposure.

Brentt’s short game was spot on in the last two days of the tourney.

Brentt struggled in the first two days of the tourney. The trees presented the ultimate challenge. There were golfers (Brentt included) that had trouble hitting off the tees and into the fairway. The fairways were curved so much that you’d have to either hit beyond the trees or play it safe and  hit short distances on the fairway…that is, if the wind will let you. The only thing that was within the golfer’s control was the putting green. Brentt mastered the greens by the 3rd day, earning himself 8th place. On the last day, Brentt shot even and ended up taking home the trophy for 1st place Scratch and 2nd place overall in his division. 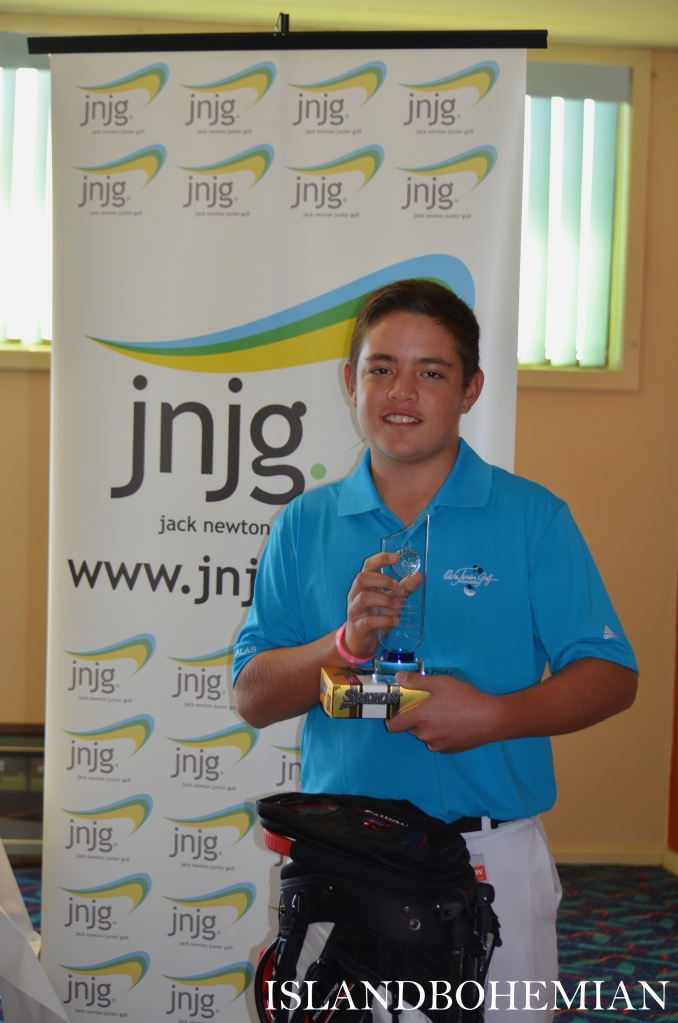 The rest of the Hawaii team, Caleb and Ray, they also proudly represented Hawaii in the tournament on and off the course. They enjoyed making friends from Australia, Canada and Japan. It was a great experience in “Straya!”

Well, this was unexpected. My brother qualified for the Srixon International Junior Classic in Sydney and when we found out all expenses were paid for, I was the only one in my family that could take him up on the offer! Brentt is definitely my little reason to travel the world. He is so ambitious and committed to his practice that he’s constantly offered to compete in international tournaments. Recently, the Guam Pacific Daily News published an article on his golf journey. I’m pretty proud of my baby bro.

This trip will be just as long as the last one. Honestly, I’m stoked to put two new countries on my list for the year. I’ve never had the freedom to travel so much. Now that I do, I have to enjoy it. After Australia, we’re heading to Saipan for our cousin’s ordination as a priest. We’re so Catholic it’s not even funny.

Anyway, I believe we have two days to explore Sydney in addition to the time we have after the tournament days. If you have any suggestions about what to try or see (on a low budget), please leave them in the comment box! Thank you. – Di 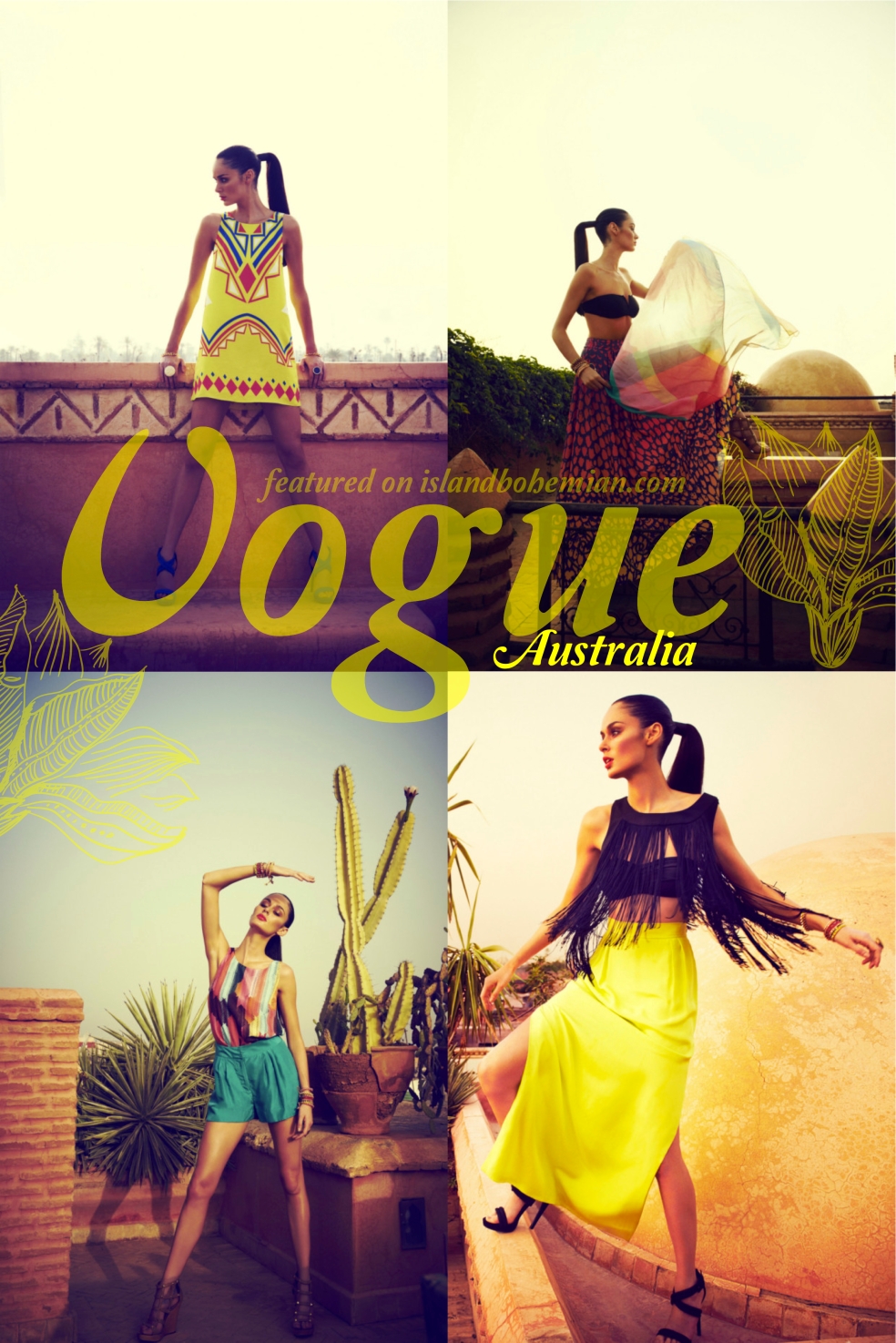 Yellows always catch my eye. I was browsing through Vogue Australia’s galleries and couldn’t help but include this in my weekly post. I’ve been on a desperate hunt for some color inspiration for my graphic projects. Mint green and coral are kind of…well..fading out for me. I like a good pop of color.

These photos by James Meakin inspire the bohemian traveler inside of me. I’m dying to go to India or Morocco, wherever there is culture and color. Hawaii gets a bit bland sometimes with beige and gray corporate buildings downtown.

I’d like to browse through trinket shops, crowded open markets, buy fresh veggies or herbs. I’d like to walk through those pointed Moroccan doors like the ones I see in National Geographic or sadly…on Pinterest. Why is traveling so expensive? Also, why must we all travel with someone? For once in my life, I’d like to travel alone. My grandfather braved Europe and Asia by himself because my grandmother was not the least bit interested in seeing the world. I’d like to try that soon, no rules, no one to worry about except myself. I just need a change of scenery like this one. Except I don’t see myself in four-inch wedges walking down a long street market in this heat. Although the maxi dress would be more tasteful and practical for this situation.

Here’s the last one I chose from the plethora of bohemian Vogue Australia shots by Meakin. I love the colors and how the lighting falls in the right places. The darkness also creates mystery. I seriously need to pick up my Nikon and start shooting once I’m done with my graphic projects.  Until then, I’ll be designing, neck deep in color and browsing tickets to the Middle East and Africa on Expedia.